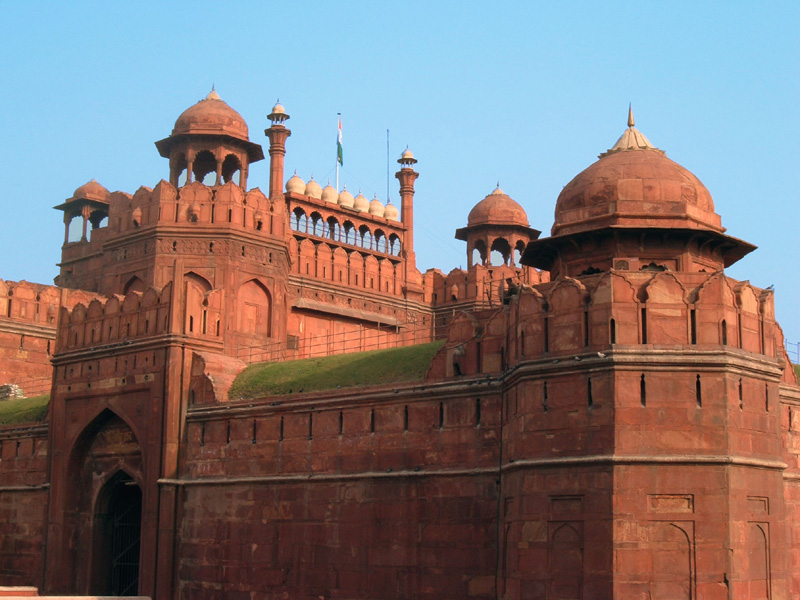 Shah Jahan transferred his capital to Agra Shahjahanabad and laid the groundwork for Red Fort or Lal Quila, April 16, 1639. It took nine years to build this powerful citadel and it ended on April 16, 1648. It is said that on one crore rupees, an astronomical sum in those days were spent on its construction. Half of this sum was spent to build the exotic palace in the fort. Built in red sandstone, it is an octagonal shape, with both parties to the east and west.

The perimeter of its high walls is about 2.41 kilometers. Red Fort stands at a height of 33.5 m on the city side and 18 m along the river. A wide moat surrounding the fort, which was originally linked to the river and was always filled with water. The two main gateways, known as Lahori Gate and Delhi Gate (name, as they face in Lahore and New Delhi respectively) are three storeys high and are flanked by semi-octagonal towers. They are located in the centre of the west and south respectively.

The main entrance of Lal Quila is through the Lahori Gate. Beyond the door, there is a passage to the roof, flanked by apartments arcades leading to the palace, known as Chhatta Chowk. These apartments are now used as shops. In addition, there are three other doors to other parties, which are kept closed. The master builders of the Red Fort were Hamid and Ahmad. Visitors are permitted only in a part of Red Fort, that the army occupies the rest of it. Some key buildings in the fort are:

Diwan-i-Am
Diwan-i-Am or the Hearing Room is located in the Red Fort in Delhi. It was originally a courtyard on his forehead and was richly decorated with gilded stucco. Heavy curtains honored the main hall, which had three bays in depth.

Moti Masjid
The staff of the mosque Aurungzeb, Moti Masjid, or mosque Pearl lies to the west of Hamam. Located on a level higher than that of the prayer hall of the mosque has inlaid marble-black lines ‘musallas ‘(small carpets for prayer) and is survived by three bulbous domes.

Mumtaz Mahal
One of six major-palace located along the river front, Mumtaz Mahal was also known as ‘Chhoti Baithak ‘. A beautiful water channel called ‘Nahr-i-Bihisht « (meaning Paradise Stream) went through these palaces. However, this palace has been removed, probably because he was totally in ruins .

Naubat Khana, or Naqqar Khana (ie Drum House), is located at the entrance to the palace. Here, music is played five times a day, the appointment hours. It housed a door known as ‘Hathi Pol ‘(Elephant Gate), where visitors walk their elephants.