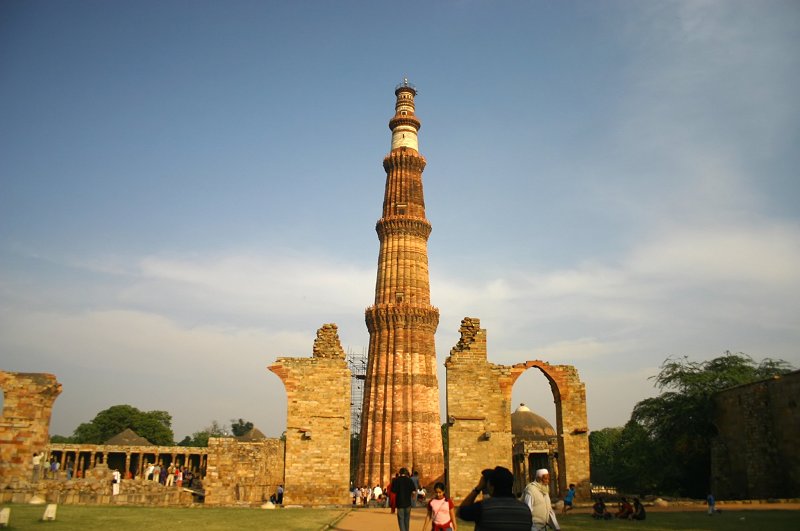 Qutubuddin Aibak laid the groundwork for Qutab Minar, a tower of victory in 1199 AD. The origins, he rose to a height of 72.5 m. It is without doubt one of the most beautiful stone towers in India and one of the most important monuments of Delhi. Iltutmish, step-son and successor of Qutubuddin, has completed its construction. Nearby, one can also see the ruins of the tomb of Iltutmish. He built in 1235 AD, during his own life, and the interior decorated profusely, using calligraphy. The tower cones a base of 14.32 m to 2.75 m at its summit and took 20 years.

Built in red sandstone, this tower sports inscriptions of verses of the Holy Koran and a few sculptures complex. We can also see the ruins of the embattlements of the city called ‘siri ‘here. It was established in 1303 AD by Ala-ud-Din, who has dug a vast reservoir of Hauz Khas to provide water in his city. Although not much of the city remains to be seen, it has been described by historians as the ‘envy of Baghdad, the rival of Cairo and equality in Constantinople ‘. In addition, one can also see the tomb of Adham Khan and Zafar Mahal in Qutub complex and the tomb of Jamali-Kamali behind.

Pillar iron
Located in the courtyard of Quwwatu ‘l-Islam, the famous iron pillar belongs to the 4th century. It is encased in the complex Qutub Minar in New Delhi. The inscription in sanskrit Gupta script and unique style ‘Amalaka ‘capital confirmed the date.

Qutub Minar legends
There are a number of legends related to the Qutub Minar in New Delhi. Some people believe that the monument was actually built by Prithviraj Chauhan, so her daughter could behold the sacred river Yamuna from its high within its daily worship.

Qutub Minar Blues
According to the inscriptions on Qutub Minar, he was twice struck by lightning and was damaged. The first case occurred in 1326 during the reign of Mohammed Tughluq.

Tomb of Iltutmish
Built by Shamsu ‘d-Din Iltutmish himself in 1235, the tomb of Iltutmish north-west of Quwwatu ‘l Islam mosque in New Delhi. Even if there was a gap of only five years between the buildings of Sultan Ghauri ‘s tomb and the tomb.