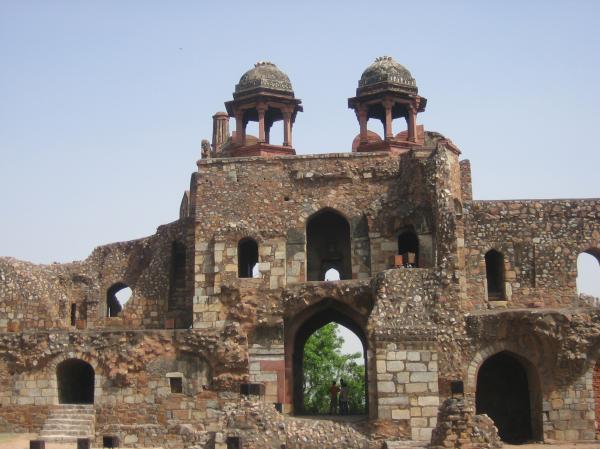 Built on the site of Indraprastha, mentioned in Mahabharata – the great Indian epic, Old Fort was the seat of the hotel for many emperors. Now in ruins, the citadel was the glory of being the seat of the legendary ruler, Prithviraj Chauhan. Sher Shah Suri built after demolishing the Humayun ‘s city Dinpanah. There are bastions angle west wall of the fort. The 2 km long ramparts of Purana Quila boast three double-decker major portals sports ‘chhatris ‘at the top. They can be found in the north, south and west.

The northeast is a known ‘Talaqi-Darwaza’ (which is prohibited Gate) and a sculpture of marble lions engaged in combat with a man in his face. You can still see the vestiges of color tiles that serve as its ornament outside. However, it is said that Sher Shah was unable to complete the construction of Old Fort and he finished by Humayun. Thus, the southern gate of the fort is known as Humayun Darwaza. There is a wide gap in the north and west sides of the fortress and a dam fortress connected with the major countries.

The excavations in the Old Fort area have revealed parts painted Greyware dated around 1000 BC, said to be linked Mahabharata. Relics and remains of period later found here confirm the belief that Purana Quila was built on the site of Indraprastha, the capital of Pandavas. These objects range from Mauryan early Mughal period, as North polished black ware, punch-marked coins, human and animal terracotta figurines and inscribed clay seals. Sher Shah built a mosque in 1541, with traits Lodhi to the Mughal style architecture.

Sher-Mandal, a double-storey, octagonal tower of red sandstone and marble, topped by an octagonal chhatri and decorated with glazed tiles and painted plaster was also built by him. The latter was said to be used as a library by Humayun. That is where Humayun fell and died. In addition, it is a sound and light show at Old Fort, introducing the 5000-year history of Delhi. Other attractions near the Old Fort is a lake with paddle-installation and boating The zoo beside it.