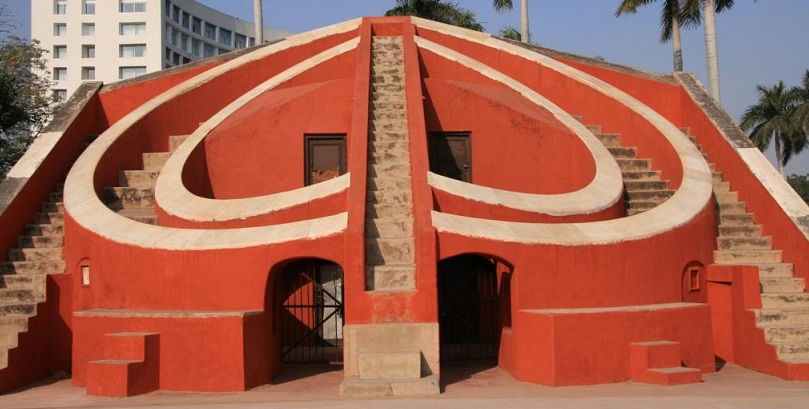 Located in Connaught Place area of New Delhi, Jantar Mantar is one of five observatories built by Maharaja Sawai Jai Singh II, the leader and founder of Jaipur, India. Smaller than Jaipur, it is still surprising because of its ability to make precise calculations of many astronomical movements. Built in 1724, the giant abstract masonry instruments Jantar Mantar are obvious engineering technological time in the field of astronomy. Jai Singh was a great astronomer and a noble in the Mughal court.

He was not satisfied with the brass and metal astronomical instruments and decided to correct and update the records with astronomical instruments more precise. He built five Jantar Mantars in India, located in Delhi, Jaipur, Varanasi, Ujjain and Mathura. Jantar Mantar in New Delhi was built to help astronomers in the practice of observing movements of the Sun, Moon and other planets. The relevance of this science would then be presented to the general public.

The sundial dominated by the nominal value and is also known as Samrat Yantra or Brihat Samrat yantra – the enormous sundial. A striking structure in yellow on the right side, he has an arm 27m high adjusted to an angle of 27 degrees. Other Yantras in the observatory are used to observe the various stars and planets. The Yantra Mishra can determine the longest and shortest days in the year. In December, a pillar eclipse and the other in June, it does not in any shade at all.

Compared to others, the observatory is the largest and best preserved today. But after its erection in 1724, she remained functional only for seven years. The observations made each day were noted and, later, a painting called Muhammad Zij Shahi was prepared. It was then devoted to the monarch. Many experts in this field are of the opinion that these observatories has fallen into disuse, due to a lack of reflection on the part of the king. The original name Yantra (instrument) mantra (formula) was corrupted to Jantar Mantar.