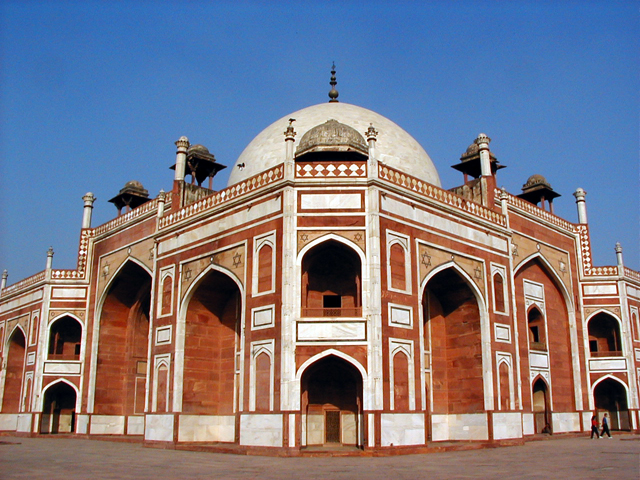 The second Mughal emperor Humayun had died just a year after he retrieved Delhi. His wife Persian, Hamida Begum, oversaw the construction of his tomb of 1562-1572. It was designed by architect Persian, Mirza Ghiyuath Mirak. Located on the banks of the Yamuna River and adjacent to the famous shrine of Sufi saint Nizam al-Din Auliya, this tomb was a precedent for later mausoleums Mughal India. The gardens geometrically arranged the intersection with many channels of water a paradise.

The tomb took eight years to build and has a Char Bagh Garden style in its design, the first of its kind in the region. They were later introduced in the Red Fort of Delhi and the Taj Mahal in Agra. Persian architectural features are also evident in the building and its main chamber is said to be inspired by the tomb of the ruler Mongolian Persian, Oljeytu, Sultaniyya. The tomb of Timur (Tamerlane) in Samarkand is also said to be the source of inspiration for the Mughal architecture in India.

In the chamber central dome, Humayun sarcophagus is found. According to Islamic practice, head south and facing east. The rooms also contain vaulted tombs which were added later. These graves contain symbols that provide full information about their occupants. The sarcophagi are generally not included, but these tombs are seen as containing the remains of women Humayun, along with several later Mughal emperors and princes.

The name of Humayun ‘s tomb is located in the Heritage List of UNESCO buildings and was the first Indian building to use the Persian double dome. Its harmonious proportions are undoubtedly the work of skilled craftsmen. Putting on a platform, there are some Indian architectural features, such as small kiosks or ‘chhatris ‘on the roof. The attractive tiles inlaid work is intricately carved using models and Persian and the elements. Its carved stone screens are praiseworthy for their delicate look.